by Zia Ur Rehman

Sindh has been facing poor governance, a law and order crisis and a lack of infrastructure, and it is widening the gap between the ruling Pakistan People’s Party and the people, prominent journalist and political activist Sohail Sangi said on Saturday.

“The Left and Sindhi nationalist parties seem to be waiting for a miracle that will change the situation and as a result, religious parties are filling the vacuum,” he added. 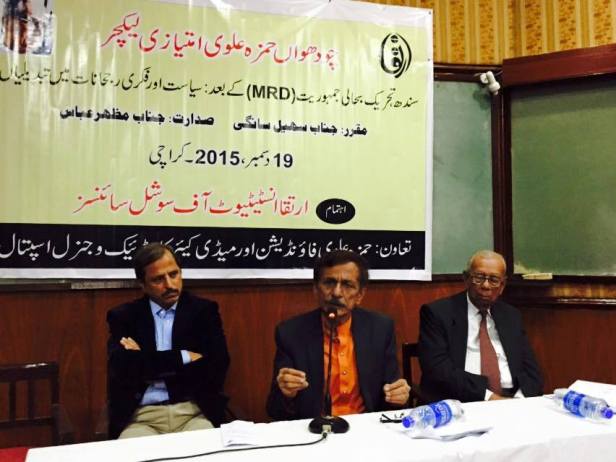 Sangi was delivering a lecture on “Sindh post-MRD Movement: challenges in politics and thoughts” – the 14th Hamza Alvi Distinguished Lecture, organised by the Irtiqa Institute of Social Sciences.

Dr Syed Jaffar Ahmed, the head of the Pakistan Study Centre at the University of Karachi, introduced Sangi while prominent journalist Mazhar Abbas presided over the event.

Before entering the field of journalism, Sangi played a key role in Sindh’s politics on the platform of the Communist Party of Pakistan between 1969 and 1980 and was arrested in the prominent “Jam Saqi case” along with other leftist leaders including Saqi, Professor Jamal Naqvi and Badar Abro.

Sangi said there were three large-scale movements in Sindh that had changed the political dynamics of the province – in both positive and negative ways.

First, a movement was launched to separate Sindh from Bombay in 1843 and the second one was to oppose turning West Pakistan into “One Unit” in 1956 to end the Bengalis’ majority.

The MRD Movement was started against Ziaul Haq’s dictatorship and did not spread beyond Sindh.

“The MRD Movement had influenced almost each and every family in Sindh,” he said.

With the exception of the Jamaat-e-Islami and the Pir Pagara group, all key political parties including the PPP, Rasool Baksh Palijo’s Awami Tehreek, the Jamiat Ulema-e-Islam and small leftist and nationalist groups were part of the movement.

“It is true that GM Syed was not in favour of the movement. But most nationalists become part of it,” he added.

A large number of people, including women and school-going children, were arrested in the movement.”

However, he said, to counter the growing political activism and radicalisation on the street-level in Sindh, Zia’s regime introduced the ‘Dacoit’ factor and weapon culture among the nationalist parties.

“Then, in the name of an operation against dacoits, Zia’s regime targeted political activists, intellectuals and writers.”

Sangi said now Sindh had not seen new political activists for the last three decades. “The PPP has also forgotten its political cadres and focused on the ‘electables’ who are largely tribal chieftain,” he added.

“After allotting tickets to these tribal chieftains for national and provincial assemblies, the PPP had also chosen them for the local government polls.”

Unlike their counterparts in Balochistan and Khyber Pakhtunkhwa, Sindh’s nationalists have failed to give an alternative, he noted.

“Students’ politics in Sindh’s academic institutions played a key role in the MRD Movement. Unfortunately, students’ politics has now ended and political parties have also not been taking interest in it.”

Though Sindh was famous for its religious pluralism and called Sufis’ land, religious seminaries had started mushrooming in an organised way during Zia’s Islamisation process, he said.

Deobandi religious clerics including Maulana Halijvi and Maulana Abdul Haq Rabbani fully participated in movements including the Bhattai Tehreek, the Allottee Tehreek and the Sindh Tenancy Tehreek in the 1950s along with progressive leaders including Comrade Nazeer Jatoi and Comrade Razman Shaikh, he said,

However, during Zia’s era, the leaders of the JUI abandoned its basic political thoughts and adopted lines of religious extremism.

He said, religious parties, especially the JUI-F, has been gaining strength in the province, and filling the vacuum created by the PPP and nationalist parties. “In Sindh, the religious parties have also a political agenda and try to solve the issues of local people by visiting their villages,” he added.

Sangi said since 1990s, Sindh saw mushroom growth of madrassas in every town and far-flung rural areas. “The organisers of these madrassas are from Punjab.”

In Sindh, a new urban-middle class has emerged and most of them have been migrating to urban towns from rural areas, mainly because of ban of government jobs and floods, he said.

“Now in urban towns, you can find people from rural areas to running shops, rickshaws and other jobs. They are now not under the influence of feudal landlords,” he added.

He also said shape of feudalism has been changing gradually. “The state apparatus and the PPP have strengthened feudalism.”