The Human Rights Commission of Pakistan’s report on the crime statistics in Karachi, released on Tuesday, shows a significant decrease in target killings in the city in the last six months, but at the same time, the organisation has expressed serious concern over the increase in extrajudicial killings during this period. 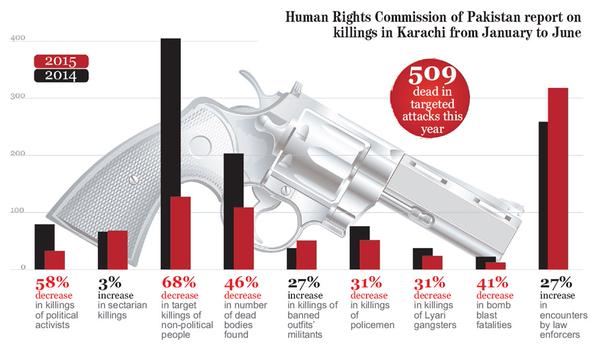 Asad Iqbal Butt, the HRCP vice chairperson, told The News that recent statistics showed that extrajudicial killings or fake encounters were increasing in the metropolis. “Extrajudicial killings create unrest and citizens lose their trust and confidence in the law enforcement agencies,” he added.

According to the report, 318 people were killed in encounters by the law enforcement agencies in the first six months of the current year, while during the same period in 2014, this figure stood at 258 – an increase of 19 percent in 2015.

Of these 318, 255 were killed in encounters with police and 62 in shootouts with Rangers.

One person was killed because of police torture.

The statistics show a significant decrease in the number of target killings, both political and apolitical.

In the past six months, 128 apolitical people were killed while the number during same period last year was 403 – a decrease of 68 percent.

However, 68 people were killed on sectarian grounds this year, an increase of three percent in comparison with 66 during the same period last year.

May was the deadliest month wherein 45 members of the Ismaili community were killed in Safoora Goth. No sectarian killings were reported in the city in June. These six months were also a dangerous period for the law enforcement agencies as 54 policemen and four paramilitary personnel lost their lives in the line of duty. In first six months of 2014, 75 policemen and eight paramilitary personnel were killed.

The figures also included casualties of the unrest in Lyari, where killings decreased to 35 percent this year with 24 people murdered in gang violence in the first six months of this year. This number stood at 37 last year.

There was a decrease of 46 percent in terms of bodies found in the first six months of this year with 109. Last year, 201 bodies were found during this period.

Thirteen people were killed in bomb blasts this year while the number in 2014 was 22 – a decreased of 41 percent.

There was an increase in killing of people allegedly associated with banned groups including Tehreek-e-Taliban Pakistan this year – 51. Last year, this figure was 37 – an increase of 27 percent.

“Police are fighting well-organised militant groups that have killed a number of cops recently,” he said.

“Human rights organisations want us to politely knock the terrorists’ doors and ask them to hand over themselves to us. They don’t know what we’re dealing with,” he added.