On April 5, Pakistan Tehrik-e-Insaf (PTI) Chairman Imran Khan, along with a retired bureaucrat Dost Muhammad Khan, had filed a petition with the Election Commission of Pakistan (ECP), seeking orders for polling in NA-42, a constituency of South Waziristan Agency.

Since the 2008 general elections, the seat of NA-42, which consists of Mehsud areas of South Waziristan, has been lying vacant owning to the law and order situation and ongoing military operation in the constituency. However, the polling was conducted on all other 11 seats of National Assembly of Fata, including the seat of NA-41, another seat of South Waziristan comprising Wazir areas. 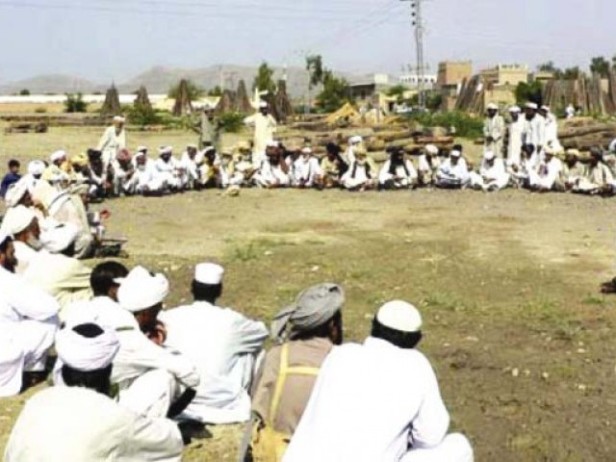 South Waziristan, the restive tribal belt bordering Afghanistan, is considered a stronghold of militants not only belonging to banned Tehrik-e-Taliban Pakistan (TTP) but also to Afghan Taliban, al-Qaeda and other foreigner militants. Four major military operations have been carried out in South Waziristan especially in its Mehsud areas to clear the area of the Taliban militants since 2004. The most recent offensive — Operation Rah-e-Nijat (Path to Salvation) — was started in October 2009, and is still going on.

According to local tribal elders, the entire Mehsud population of around 0.1 million is displaced from the area because of military operation. Some of the Mehsud IDPs are living in adjacent settled districts of Tank and Dera Ismail Khan as well as Bannu and Peshawar, but a majority of them went to Karachi. “About 75 per cent of Mehsud IDPs have arrived in Karachi and moved in with relatives or rented accommodation,” says Shah Wali Advocate, a Karachi-based Mehsud social activist, who heads Pashtun Peace and Development Movement (PPDM). He says that Mehsud IDPs are living in Sohrab Goth, Sultanabad, Mingophir, Pipri, Landhi, Ittehad Town and other suburban areas of the city.

Although the government officials repeatedly claim that the area is now completely cleared of militants and they are sending displaced people back to their homes, the locals are unwilling to return to their villages as they fear the militants are either hiding in mountains or have escaped to adjacent tribal areas.

Most of the displaced Mehsuds TNS spoke to were not yet ready to return due to security situation, damage to their houses, lack of livelihood opportunities, electricity, food and other facilities. “It is very dangerous. If we go back to our homes, militants will be there because they are still alive and have just moved to neighbouring tribal areas,” says Sharif Mehsud, one of the displaced persons who refused to go back. The displaced families say it is the fourth time they have been displaced from their homes due to operation against the Taliban militants.

Khalid Aziz, a former bureaucrat and president of Regional Institute of Policy Research and Training (RIPORR), a Peshawar-based think tank, claimed in an article he wrote in an English daily on March 9 that 90 per cent of the inhabitants of South Waziristan did not suffer displacement, citing the findings of the RIPORR.

However, Maulana Saleh Shah, Senator from South Waziristan, strongly denouncing the RIPORR’s findings, say that the report is a well-thought-out plan to camouflage the ground realities, as inhabitants of the five Tehsils — Ladha, Makeen, Sararogha, Sarweki and Khaisor — were forced to live a miserable life elsewhere in the country as IDPs. Thousands of houses vacated by Mehsuds were either washed away by rains or damaged in skirmishes between the security forces and the militants, he says.

Shah says that the inhabitants of constituency NA-42 could not even elect their representative in the National Assembly then how can they claim that the area was not affected.

Although the people of the constituency NA-42 have already urged the ECP to hold election, political analysts believe that Imran Khan’s recent petition will pressurise the ECP to conduct polls at alternative places as Mehsud IDPs are not willing to go back to their villages in South Waziristan. The petitioners also referred to similar arrangements made for the people of Azad Jammu and Kashmir (AJK) and Northern Areas in Rawalpindi and Karachi whenever elections are held.

The PTI’s leaders claim that the party has made significant inroads in the tribal areas, especially South Waziristan, through Imran’s consistent opposition to the US drone attacks. Sources in the PTI say Dost Muhammad Khan, Imran’s friend and a retired bureaucrat, is the party’s possible candidate from the NA-42. However, local political observers say the contest on NA-42 in upcoming elections will be among the three political parties — Jamiat-e-Ulema Islam-Fazl (JUI-F), the PTI and Awami National Party (ANP).

In 2002 general polls, Maulana Merajuddin of JUI-F won the seat from NA-42. “JUI-F had considerable influence and strong organisation in the area, but the party has been facing rift because of ticket allocation during the recent senate polls,” says Anwar Mehsud, a senior journalist. JUI-F’s former leader Maulana Hisamuddin, who has recently joined Nazaryati faction of JUI, will spoil the votebank of JUI-F in the Mehsud area.

Although the popularity of the PTI is growing rapidly among tribal people, migration of Mehsud IDPs to Karachi will help the ANP win the seat from NA-42. Mehsud tribal elders complain that the constitution clearly gives the right to Pakistani citizens to choose their representatives from their respective constituencies, but they (Mehsud tribesmen) are deprived of this fundamental right.

Ismail Mehsud, provincial joint secretary of ANP in Sindh, demands that like AJK polls, the ECP should make arrangement for holding elections on NA-42 at alternative places, especially in Karachi. Local analysts say that ANP can grab majority votes of Mehsud IDPs living in Karachi. It is pertinent to mention that Amanullah Mehsud, one of the ANP’s two members in Sindh Assembly, also hails from Mehsud tribe of South Waziristan.

The writer is a journalist and researcher: Email: zia_red@hotmail.com